What are regulators and why should I care?

If you are in a hurry, the short answer to that questions is: Regulated pixels are generally better pixels because they have a more consistent brightness on the string throughout, and they can travel longer distances before having to deal with further power requirements.

However, if you have some time to learn a few things from an arm-chair engineer, this is the long answer:

Smart pixels are comprised of two main ingredients, an IC that allows us to individually address each individual light, and a light source… the LED. Both the IC and the LED are happiest operating around 5 volts. However, most decorators like to use a higher voltage because it allows us to run more pixels together in a string without having to worry about voltage drop as much. To keep that IC and LED running happily, we need to reduce the amount of voltage presented to the components. Currently, there are two popular methods to do this, a voltage regulator or a set of resistors.

Generally speaking, it's a bad idea to step down voltage from a high voltage source to a low voltage circuit to provide power using resistors because if the components being powered need any serious current, the resistors will most likely burn up and fail. However, in the realm of pixels, each LED light draws under half a watt of power, thus, the most popular way to reduce the popular 12 volts down to around 5 volts is with a set of resistors. The reason this is popular comes down to the all-mighty dollar, it's cheaper to use a bunch of resistors to do the job of a voltage regulator, and cheaper means more pixels on your string before your budget runs dry.

Resistors work in direct proportion to the input voltage and the output current. If we have a known input voltage of 12 volts, and a known output current of 0.3 watts, we can pick out a set of resistors that will allow our LEDs to burn bright without causing them to burn up from over-voltage. However, since they work in direct proportion to the voltage, as the voltage drops towards the end of your string of lights, you start to see the the LEDs get dimmer. The reason for this is the resistors that were chosen for the string of lights were meant to be used with an input voltage of 12 volts. When that voltage drops down to 9.5 volts at pixel #130, the resistors are still doing their job, but instead of reducing the input voltage down to 5 volts, they reduce it closer to 4.5 volts. When that voltage finally drops down to around 8 volts at pixel #170, the output voltage from that resistor set comes out to be around 3.5 volts which gives you a very dim LED.

The best use for needing regulated pixels has to do with voltage drop over distance. If you have a string that needs to go a long distance, adding a little extra voltage to the line will cause the voltage to drop further along the line thus allowing for a much longer run before any additional power requirements are needed.

As I said in the short version, overall, regulated pixels are better. They cost more due to the hardware inside, however, when you need to go long distances, they are a great alternative. The one major caveat is that regulated pixels are not forgiving. If you mis-wire regulated pixels, they will blow and will need to be replaced where the resistor style pixels usually remain unharmed. However, we humans don't make silly mistakes like mis-wiring the positive and negative, right?

12v Bullet, Front and Back
With Resistors

Probably the most prevalent type of pixels, the 12v bullet resistor pixel. When you look at the back of this pixel, you will see a set of resistors that forces the 12v current down to 5v. 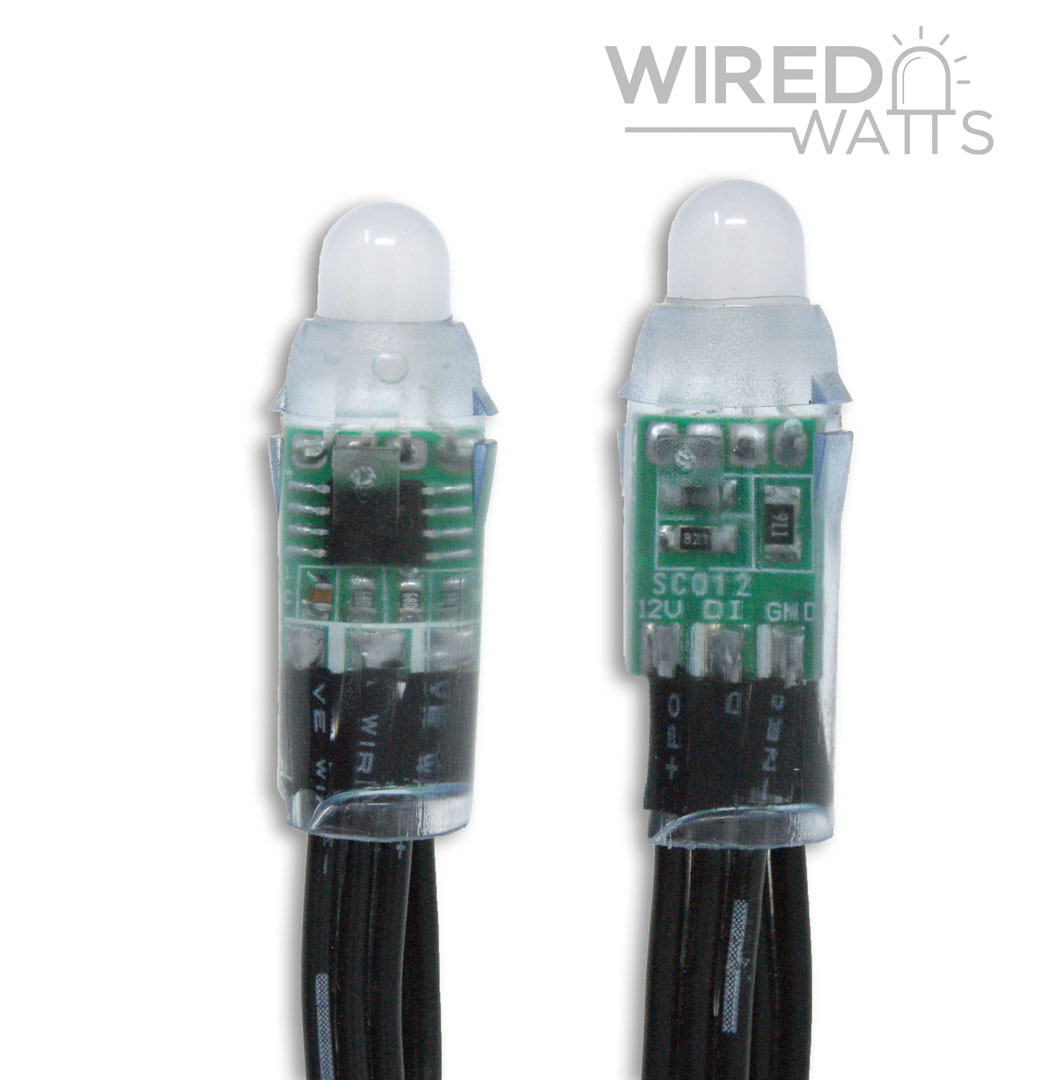 12v Bullet, Front and Back
With Regulators

Notice on the back side of this pixel, you will see a black blob with three conductors instead of a set of resistors. This is the easy way to tell the difference between a regulated pixel and a pixel with resistors. 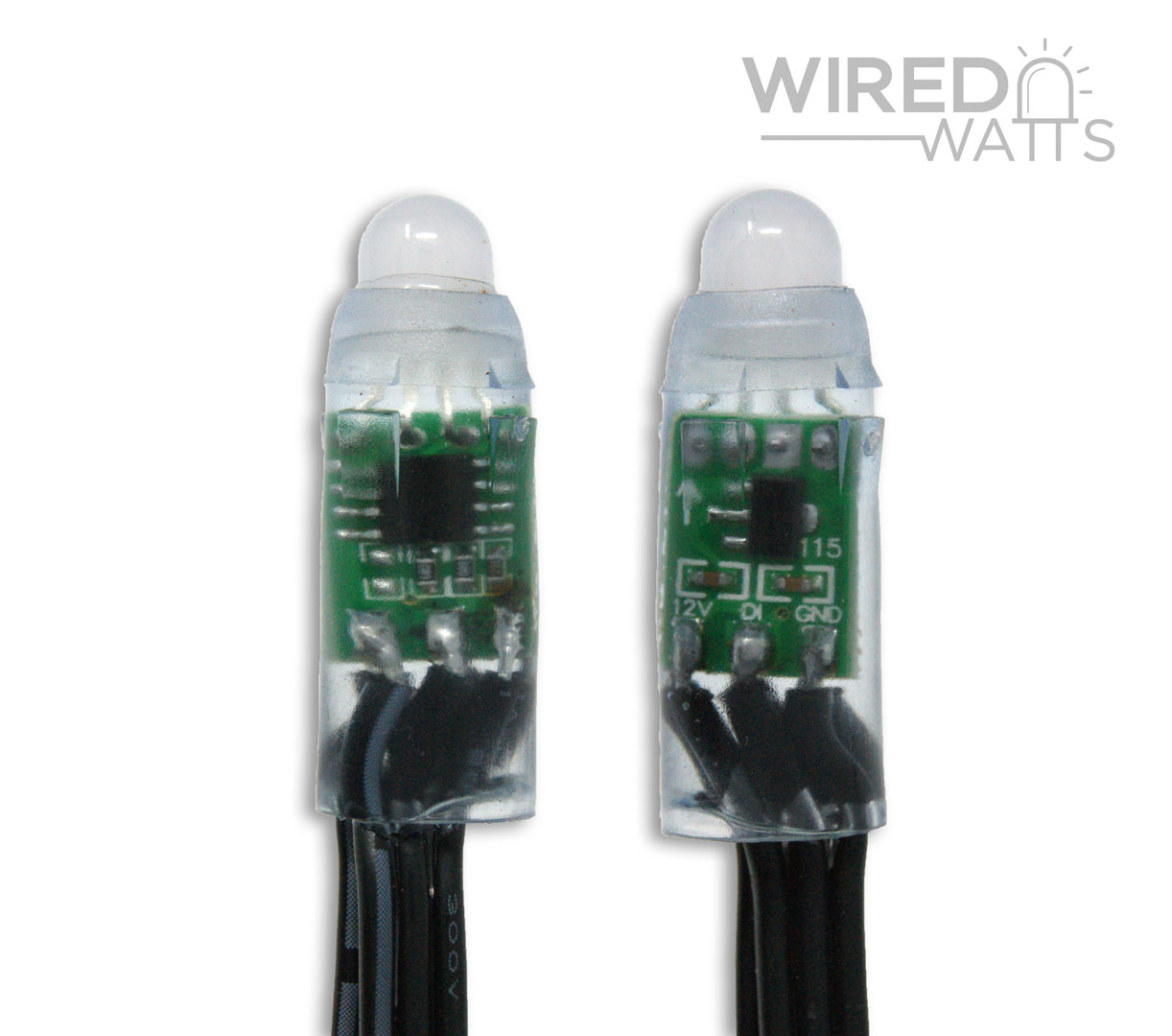 5v Bullet, Front and Back

As you can see, this pixel does not have a resistor or regulator on it. Why? It doesn't need it because the voltage is already 5 volts and thus, the IC and LED should be happy.